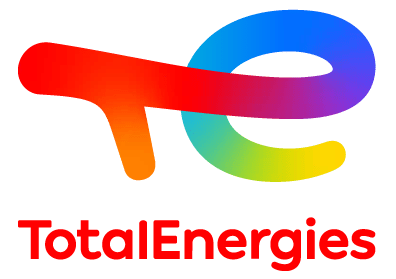 Total, established in 1924 to help France participate in oil and natural gas development, is a global integrated energy producer and provider. The company’s refining and chemicals segment transforms crude oil and natural gas into fuels and polymers. Total is one of the world’s 10 largest integrated producers. It’s refining and petrochemicals division includes Belgium, France, the United States, Saudi Arabia, South Korea, and Qatar.

“TrendMiner is a user-friendly self-service analytics tool that provides us with tremendous time savings. This tool not only saves us time, it delivers better quality results than data models.” 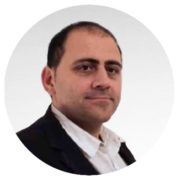 “Process Engineers, Technologists, Run Engineers, or Operators… Thanks to TrendMiner, they can unlock the power of the industrial data for their day-to-day questions.”

Like many companies, Total had been collecting operational data for years and the only solution it had to analyze the data was a spreadsheet. It lacked an easy and quick way to provide its process experts with actionable insights from stored time-series data.

Total had thousands of assets and millions of sensors to monitor. It also had a ton of data to analyze. Total did an extensive search of the analytics landscape, and selected TrendMiner to provide analysis of time-series and contextual data from the company’s manufacturing processes.

More than 80% of process engineers found significant value in the solution during its initial trial period. Since selecting TrendMiner, Total has established golden fingerprints, found the root causes of process anomalies quicker, gained greater understanding of influence factors on process behavior, and more.

The landscape for analytics tools includes both those made for generic analysis from any data source and those made specifically for industrial processes. Total evaluated the options and chose TrendMiner for its seamless integration with existing assets, including its OSIsoft PI historian.

TrendMiner gives Total engineers the power to discover what happened, why it happened, and how the outcome might be changed in the future—without the help of a data scientist.

The level of the stripper had been causing a problem for some time. Whenever there was a sudden increase or decrease in the level, the advanced control system would interfere with production so it could stabilize the column variables. Using TrendMiner, engineers applied filters to eliminate periods of no production, and then using an aggregated formula tag to calculate the variance in the stripper level. Using that calculation, engineers were able to search for periods with the same variables. Process experts learned that the events started at the same time the process control unit was upgraded. Furthermore, they determined that temperature and reflux flow were influence factors that caused the level to suddenly change.

Watch the video to learn more

Fingerprinting: Find the Ideal Start up of the Main Air Blower

The Main Air Blower (MAB) brings in oxygen for the coker. This is a critical equipment, as the plant will shut down if the blower is not functioning. Buying pure oxygen is a second, but more costly, source of oxygen besides the main air blower. Start-ups happen infrequently and usually only after a problem that forces a shutdown. The most recent start up occurred after a hurricane. Engineers used that data point in TrendMiner to perform a similarity search over several years of data. The search revealed only one other start up over a significant period. This indicated that the MAB was performing well. Engineers overlaid the two periods to create a strong golden fingerprint that can be used to compare future start-ups.

The hydrotreater exchanger’s fouling quickly becomes a constraint that affects a unit’s output. When fouling occurs, a valve is opened to maintain throughput. Once the valve is 95% open, engineers lose the ability to understand the fouling rate until pressure differences in the exchangers indicate a need to stop the process and clean the exchangers. Process experts created a formula tag in TrendMiner to represent pressure difference across the heat exchangers. Engineers also observed that pressure difference appeared to be a reliable indicator of when the valve would be almost fully open. By analyzing time-series data for periods where the valve was open more than 90%, engineers learned it was possible to determine the moment at which the rate of fouling in the heat exchangers became a constraint on production. Engineers created a monitor for that point, when an alert would inform them of the need to clean before production suffered.

Total wanted a solution that would allow it to analyze time-series and contextual data without resorting to spreadsheets. With its advanced, self-service system designed for the process industry, Total found TrendMiner benefits during its pilot phase.

Since rolling out the software, Total engineers use TrendMiner to:

Get a quick visual analysis of process behavior using trend overlays, with the self-service ability to run calculations inside the software

Alert key stakeholders when a process deviates from its golden fingerprint, or predict when such events might occur

Communicate findings with engineers and shift workers on the floor, even when a process expert is away from the plant

Finding the Right Solution for Its Environment

Total wanted a powerful analytics solution that would complement its existing data infrastructure. Listen to Fabrice Leclerq explain how it came to select TrendMiner as that solution for a pilot program. 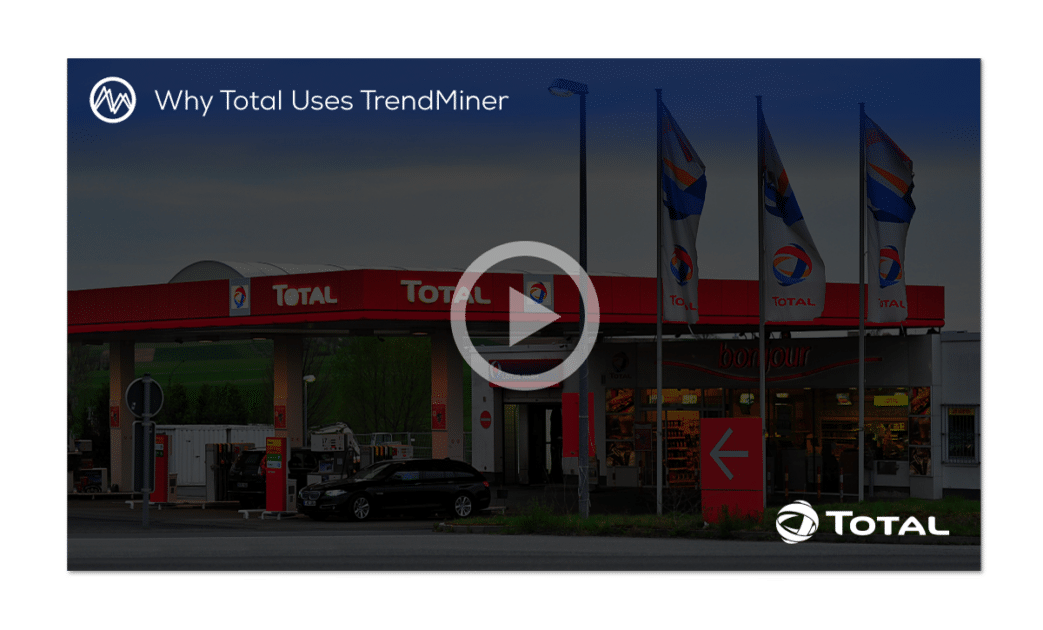 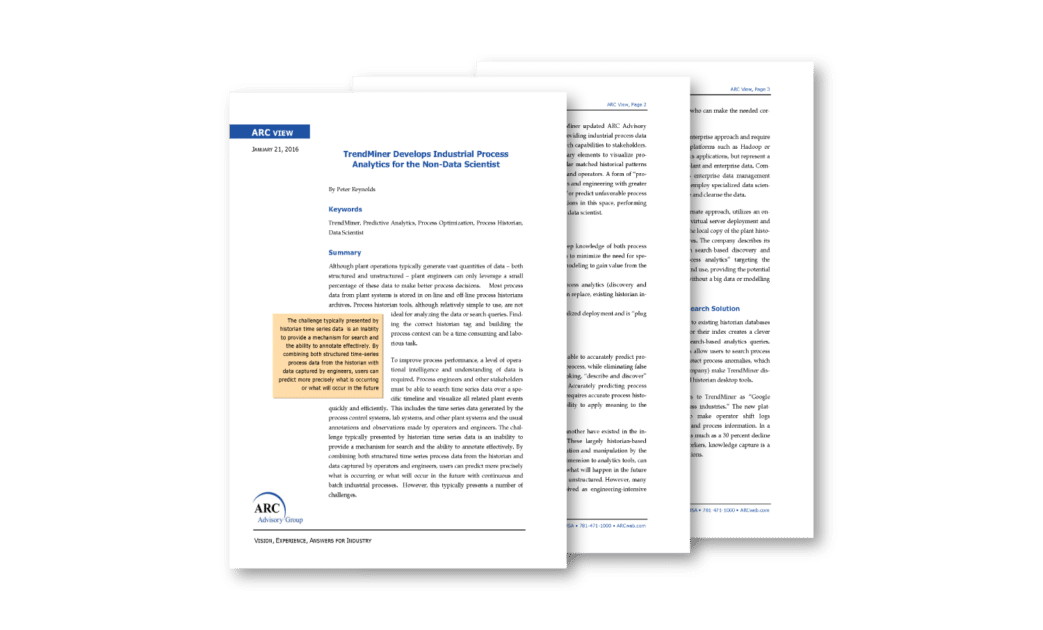 ARC Advisory Group, the global technology research firm, is renowned for its insights into the convergence of IT and OT at industrial companies. In this whitepaper, ARC Principal Consultant and Lead Analyst Janice Abel explains how Total Refining & Chemicals (Total R&C) combined real-time process data from OSIsoft with TrendMiner’s self-service process and asset analytics software to achieve measurable success.

Discover Other Success Stories of Our Customers

Back to all customer success stories overview