A plant in the energy & utilities industry uses natural gas to produce electricity. This combined-cycle gas power plant is equipped with two turbines that power a generator. 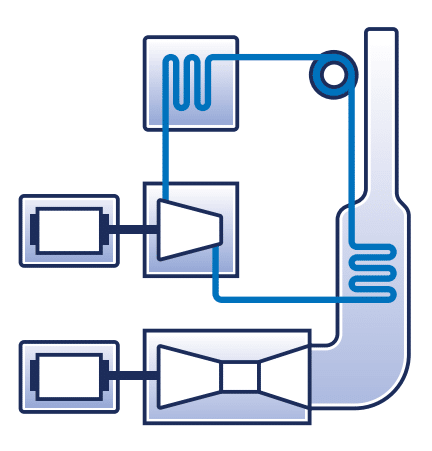 Over time, the performance of a unit of the plant’s power station began to worsen, leading to capacity loss and lost revenue. The loss was gradual, so the losses went unnoticed at first. After a couple of years, however, it became clear that performance was degrading. The team wanted to quantify the impact and duration of their losses, but before using TrendMiner they didn’t have the toolset do this efficiently

A decrease in performance is usually a gradual phenomenon that only comes to the surface after a long period of time. With TrendMiner, the team could clearly visualize operations over time. Using a value-based search, the decline in performance was quickly confirmed and quantified. This formed the foundation for the rest of their analysis.

Due to external factors such as unplanned downtime and load reduction on market demand, the team needed to dig deeper to measure the actual performance of the unit. To do this, the engineers used TrendMiner to identify which process parameters differed consistently between those two time periods to find a potential root cause of the decreased performance.

The team found that the gas fuel flow, the compressor discharge temperature and the inlet guide veins reference angle differ consistently for both groups of layers. The resulting observations lead to the hypothesis that the root cause of the problem could be explained due to non-calibrated inlet guide vanes, which impeded air and fuel supply and ultimately power generation in the gas turbine.

Using the annotations in TrendMiner, observations were captured and shared within the organization for the investigated periods. As a result, when an engineer goes back and looks at the production data, he will be made aware of the non-calibrated inlet guide vanes. He will know immediately that this data corresponds to sub-optimal operation, and why. Capturing valuable information guarantees the availability and distribution of knowledge, and will provide opportunities for organizations to enhance productivity and gain competitiveness.

After years of reduced power production and tangible revenue losses, plant engineers needed to identify and resolve the issues at hand. Before TrendMiner, countless time was invested in meetings, discussions, and analysis using conventional tools and methods, but they were still unable to find answers. Leveraging the analytics capabilities of TrendMiner, they were able to efficiently identify and resolve the capacity loss. The improvement potential is around 2 Megawatts of extra production, resulting in an estimated $260K per year in business value.

Spent by the engineers for assessing and solving the use case, which would have cost days without the use of TrendMiner.

Increase in business value due to identification of the root cause for capacity loss.